When designing a pipe network, various parameters must be taken into account. First of all, the medium itself must be evaluated. For the sake of simplicity, we will start with the liquid medium water. Then it has to be clarified whether it is pure water or whether it is loaded. In the latter case, minimum flow velocities must also be taken into account. If these are too low, for example, the solids can settle and lead to so-called raw blockages. The main focus is also on pipe friction losses. Figuratively speaking, friction loss is caused by the movement of a medium within a pipe section. Size, shape and surface condition have a direct effect on the friction of the medium within the pipe network.

For reasons of simplification, we speak here of friction losses or, in practice, incorrectly of energy losses. Strictly speaking, energy is a conservation variable (law of conservation of energy). Energy is therefore not lost, but converted - e.g. from kinetic energy to thermal energy. The kinetic energy of the medium is therefore converted into thermal energy, which leads to the pressure at the beginning of a pipe being higher than at the end. The resulting temperature increase does not play a role in practice because it is usually not perceived.However, it is important to establish an optimal ratio in the choice of pipe material and the dimensioning of the pipeline for longer pipe sections and corresponding volume flows. Firstly, it is about the energy costs themselves, which will certainly not be lower in the future, and secondly about sustainability. What is meant here is the conservation of resources, regardless of whether hydrocarbons are burned or electrical energy is used to drive the pumps.

Let's concentrate on our field of business: in the field of groundwater lowering as well as in irrigation, pipe sizes of 4", 6" and 8" are common. Of course, there are also applications where significantly larger dimensioned pipes have to be used in order to reduce friction losses to an acceptable level.

In terms of the diameter of the pipe, the following statement applies: "the larger the pipe/diameter, the less pressure is lost". This is because if pressure is lost, more energy must be expended to maintain the required pressure at the outlet of the pipe network. A higher energy input is known to equate to higher costs. This is offset by the higher material costs for the larger dimensioned pipes and/or hoses. It is up to the project designer to find the optimal "break-even point".

In addition to hot-dip galvanised steel pipes, pipes made of polyethylene have also established themselves as standard in the above-mentioned industries. Both materials have different k-values in relation to the roughness of the surface when new:

Over time, so-called incrustations develop inside the pipe, caused by corrosion or other deposits that can affect the roughness of the surface.

Modern software available for determining pipe friction losses enables rapid calculation of pipe networks and, in conjunction with the characteristic curves of the pumps to be used, determination of the respective operating point. 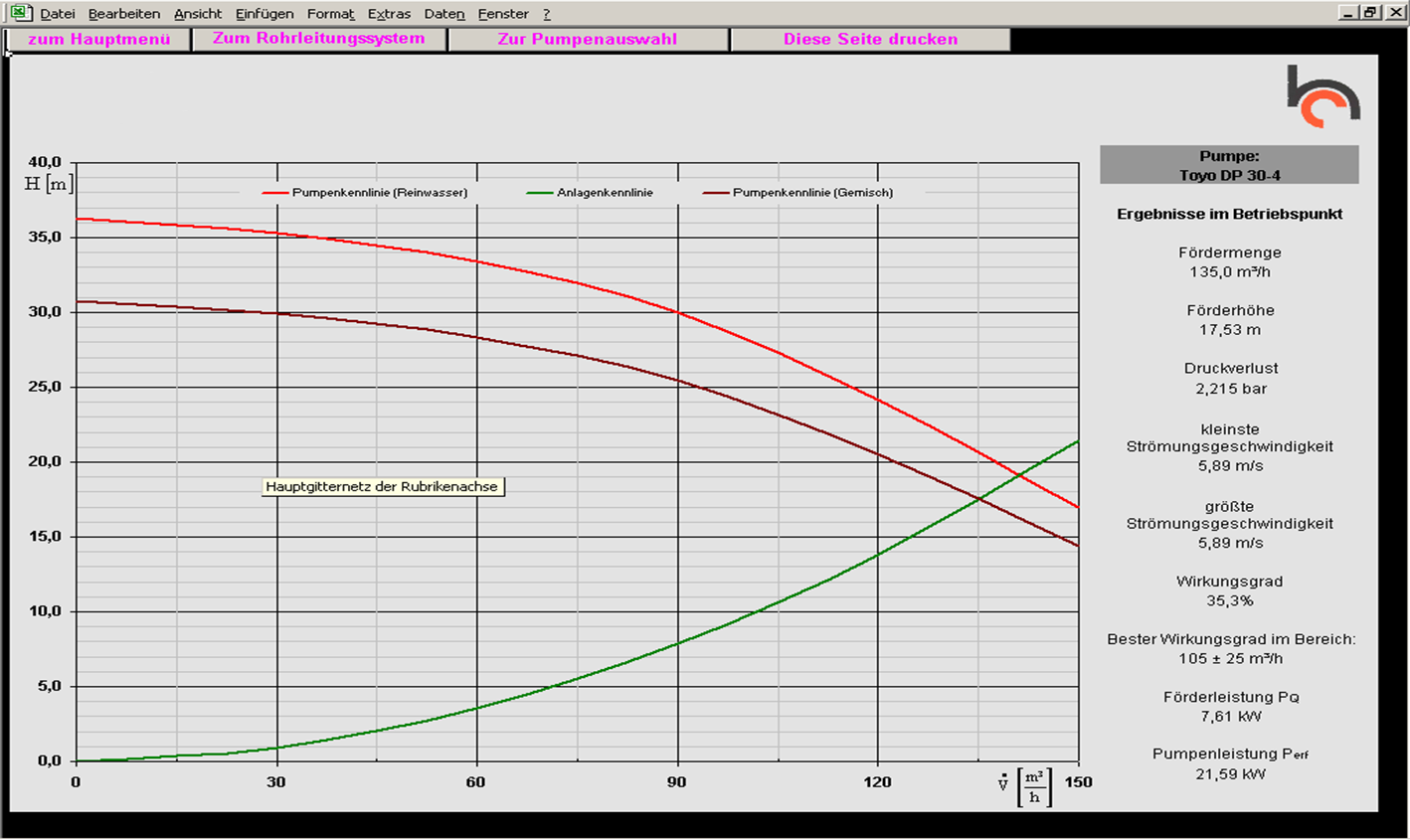 HÜDIG: Calculation of the system characteristic curve and determination of the operating point