At the 5 MW biogas plant Wetscher Bruch in Wetschen, the fermentation residues are stored in a total of 7 concrete silos (diameter 32 m, height 7 m, 5500 m³ capacity).

According to the EEG 2012, fermentation residue stores must be covered gas-tight.

The competent authority made it a requirement that 5 containers for immission control must be covered gas-tight.

The operator of the biogas plant, Mr. Thorsten Dünnemann, was looking for a system that would best meet his requirements and provide him with the most advantages.

After a long period of research, he decided on the biogas floating roof from the company N-E-ST Neue Energie Steinfurt GmbH. The innovative, floating and gas-tight cover offers him several advantages in operation and he was convinced by the concept.

In contrast to a double membrane roof, the foil roof floats on the substrate surface and adapts to the substrate level of the fermentation residue storage.

The most important advantages are:

The implementation of the project started in September 2018 and was completed in December 2018.

Before assembly, the containers had to be emptied and cleaned.

Afterwards, the assembly could be started immediately. For the assembly, a truck-mounted crane is needed to lift the material into the silo.

The assembly can be carried out by 4 people.

A PVC pipe was installed on the outer wall to brace the floating film and as an additional floating body.

The star-shaped construction of special floating pontoons, which are connected with gas channels, serves for stability and as a basic framework for the film. This construction will later be used for the targeted removal of the gas that accumulates under the roof.

The floating foil was unrolled and spread out. This is a special gas-tight and particularly hard-wearing film, which is delivered already pre-fabricated for a perfect fit.

The design and covering was carried out by our installation team, as some experience is required here.

The floating foil was stretched and fixed to the pontoons by counter plates. The mixing hatches were tied in on site and installed tightly. Through the mixing hatches it is possible to stir the fermentation residue storage afterwards without any problems.

The central ring line for rainwater extraction was installed. Via 6 stub lines the water is extracted at previously defined points. A special pump system from the company HÜDIG was used for this, which has enough power for the central suction of all 5 roofs.

Pipelines for gas and water extraction were routed separately over the container wall.

A hose frame on the container wall with deflection rollers and counterweight ensures that the hoses are guided tautly at each fill level.

At the end, the hoses are connected to a fixed stainless steel or PE line. From here, the hoses are transferred to the gas and water pipes which lead underfloor to the central suction unit.

Underfloor pressure pipes were laid for the central extraction of biogas and rainwater.

The water pipes and gas pipes were laid with an appropriate gradient via a central pipe to the pumping station or to the flare.

In addition, power and control cables were laid for the automation technology.

The biogas produced is burned centrally via a flare. The compressor provides the necessary negative pressure in the system. The flare is controlled automatically.

Alternatively, it is also possible to feed the residual gas from the fermentation residue containers back into the plant's gas network and to generate electricity.

The central rainwater extraction system is located in a container. A vacuum unit HC 468/15 from the manufacturer HÜDIG is used for the extraction of the rainwater.

All in all a very nice project!

Our special thanks for the active support go to the operator of the biogas plant Mr. Thorsten Dünnemann, our film supplier and installation partner Genap and the company HÜDIG. 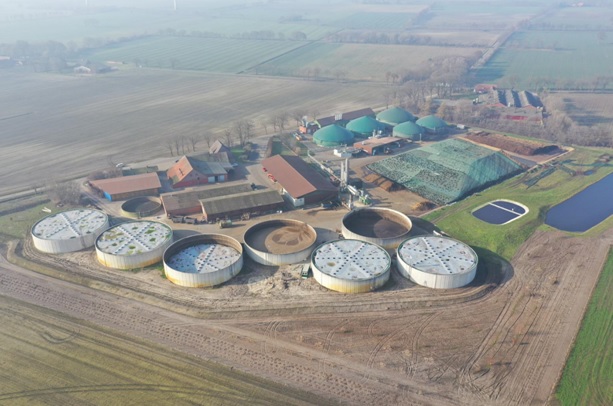 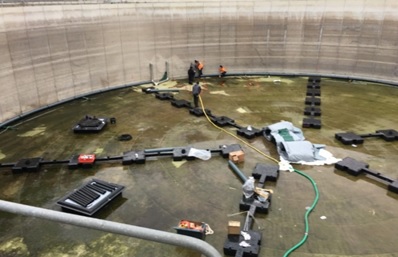 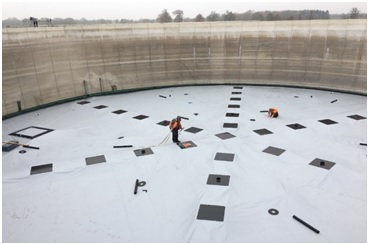 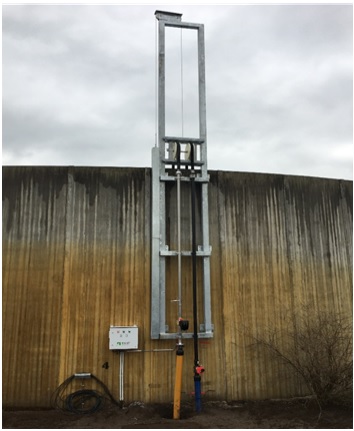 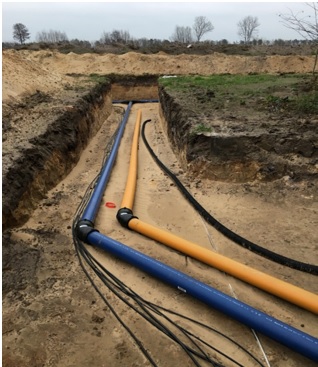 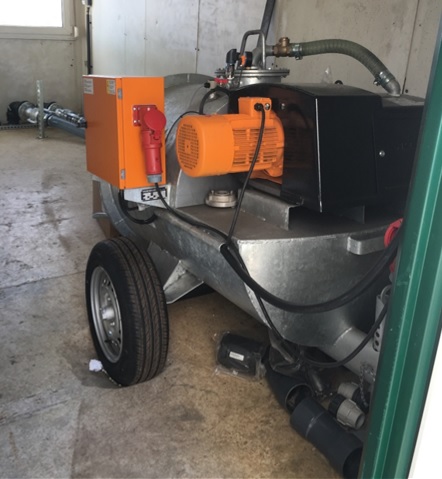